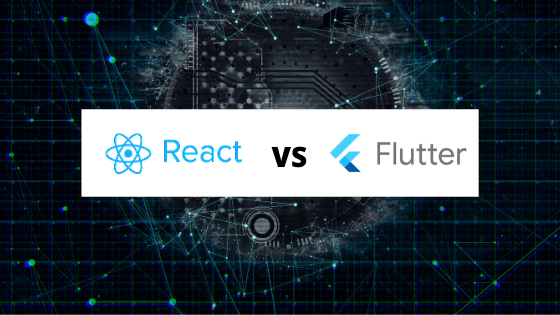 With the super-fast advancement in app development technologies, cross-platform frameworks have become the top choice among developers. The need for frameworks that can help build mobile apps on both ios and android simultaneously gave birth to React, Flutter, and other similar techs. This blog on React Native vs Flutter will bring more clarity on the key differences between the two frameworks and help you choose the right technology for your app development.

React Native vs Flutter is a debate that’s all over the dev community. Flutter and React, both are cross-platform app development techs and launched by giants of the IT industry. React which works on Javascript was launched by Facebook back in 2015 and has become the most preferred development framework among developers. Flutter, on the other hand, was launched by Google in 2018 and became an instant favorite because of its hot-reload feature. React currently holds around 86k Github stars with over 2000 active contributors. Flutter currently has over 500 contributors and has gained over 90k Github stars in a much shorter period compared to React.

Although both the frameworks have the same use, here is the list of differences that you’ll be reading about:

Single language for programming on both ios and Android is probably the best part of using cross-platform app development technologies. The first and foremost difference between React and Native is the programming language. React works on Javascript which is a very popular programming language and it’s easy to find skilled developers who work on Javascript.  While Flutter works on the DART programming language which was launched by Google itself back in 2011. Javascript is dynamic and according to Stack Overflow’s Development Survey, over 71% of developers have worked with language. While DART is less popular, the easy documentation, syntax, and Google’s name is helping it gain popularity post Flutter’s Launch.

React Native works using components, but rather than using web components it uses the react- native or third party libraries for mobile app development. Components help you split the UI into multiple pieces, meaning you can design a particular piece without interference.  Due to the lack of DOM and Markup, React Native does not use HTML and CSS but there are components that offer a similar mindset to both. Also the user interface of react native is very similar to HTML and CSS which makes it easy for development.

Flutter is more dependent on widgets and uses them as the building block. It is packed with a decent number of widgets to help smoothen the development process. Unlike react, which helps you build the app step by step using components, every property you use/change in Flutter will be done using a widget. Like loops, Flutter has nested widgets, each working inline with the properties of the parent widget.

React Native works on the Flux architecture developed by Facebook and it highly relies on Javascript bridge to connect with JS components. The dependency of React Native on JavaScript Bridge makes it slower in performance when compared to Flutter.

Flutter being primarily used for UI development is based on Skia C++ architecture. Google Chrome is one of the examples of apps built on a low-level Skia engine. Since Flutter works on Dart, it has all the components in-built and doesn’t need the bridge to connect with native modules.

The prolonged process of compilation in React Native, makes it lag in performance when compared to Flutter. Do note that Flutter has only been able to beat React Native because it compiles all components at the same time.

So, this was a short overview of React Native vs Flutter. The programming language, development method, and architecture are currently the only areas of difference between React Native and Flutter. While React is more popular because of the ease of development and use of Javascript, Flutter is going through a phase of constant improvement by Google. With increased community support and ease of installation, Flutter might surpass React in terms of usability in upcoming years.

If you are looking for native or hybrid apps for Android and iOS, we can help you complete the project with brilliance. Our coders are experts in building cross-platform apps based on React Native. With our experience of working over 50+ projects on React, we’ll build you an app that has a unified structure and is easily manageable.

Let’s connect to discuss more on your project and why we as an app development company prefer React over Flutter.